Translator’s note: this article discusses the very recent (just a few days ago) discovery of bioluminescence in the crimson-red Japanese mushroom Cruentomycena orientalis, first described in 2016. Peer-reviewed research on this newly discovered characteristic, and what it means for the Cruentomycena genus and the world of normally plain-colored bioluminescent mushrooms in general, has yet to be performed, but the gears are now in motion.
Translated by Nathaniel Guy

(Translation: Believe it or not, a bioluminescent specimen of Cruentomycena orientalis (or close)! Σ(ﾟДﾟ) Amazing!! This is a specimen from Kyūshū, Japan, that I received from Amitake @mushroomamitake. Its bioluminescence is faint, but you can see that both the fruiting body and the mycelium on the substrate are glowinggggg (ﾟﾛﾟ*)(ﾟﾛﾟ*)
Cruentomycena sp. Jun.2020. Fukuoka prefecture.)

Ami Iwami, who discovered this Cruentomycena orientalis in Fukuoka on June 10th, is the deputy head of Kinokobito (this website). C. orientalis is a brand-new species, first described in 2016 by mycologist Haruki Takahashi (author of the tweet shown above).

Actually, C. orientalis hasn’t been observed all that much, and it’s only been found in a limited geographic range within Japan. From what I could find on the net, it seems that it’s been found around Mt. Fuji, within Tokyo, in Yamagata prefecture (quite far away from Tokyo!), in Kyūshū (Saga, Kagoshima, Oita, and Miyazaki prefectures), and in Okinawa prefecture, including the Yaeyama Islands. In other words, it’s only been found in part of the Kantō region, in Yamagata, and in Kyūshū.

And now, one of the missing puzzle pieces of the Kyūshū map has been filled in, with the recent discovery of Cruentomycena orientalis in Fukuoka.

I interviewed Ami about her discovery. While walking on a mountain path at 200 to 300 meters elevation, she spotted this cluster of crimson-red mushrooms growing off the side of the path. She says she immediately thought, “whoa, this is C. orientalis!” She took some specimens home with her in order to draw a sketch.

Arriving home, something started nagging at her. That something… was the leaves. She’s unsure what type of tree these leaves are from, but as you can see, they’re somewhat large leaves from a deciduous tree. She realized that she’d seen leaves like this before…

Where had she seen leaves like this…? And then, it came to her!

“Aren’t these the same leaves I saw glowing?”

This is where Ami Iwama’s skills really shine. Anyone who accompanies her out into the woods will have remarked on her keen perception. I’m familiar with it myself, as we’ve gone mushroom hunting together many times in the past. Sometimes she takes a good hour just to travel 10 meters (lol). She’s not only extremely skilled at finding mushrooms; her ability to use tiny hints to make deductions about them is unparalleled.

Some time ago, she found certain leaves on one of her walks and had a hunch about them. She took them back home, observed them for some time in a dark room, and confirmed–much as she’d suspected–that they were glowing!

And now, she had a sneaking suspicion that these leaves were the same glowing leaves she’d found once before. She took them into a dark room and stared at them until she could confirm: they were glowing faintly.

She then took the photo above. She used a Canon PowerShot G7 point-and-shoot, which she’d saved up to buy in order to photograph bioluminescent mushrooms. She shot with an exposure time of 4 minutes, at ISO 3200. These were the same settings that she’d previously used to photograph the bioluminescence of Marasmiellus venosus (Har. Takah., Taneyama & A. Hadano).

She took a good look at the photo she’d taken, and it hit her:

She never even imagined it would be possible that the garnet-red Cruentomycena orientalis could possibly be bioluminescent! But sure enough, the photo showed that the mushrooms’ caps and stipes were definitely glowing. She set down the camera, and went to check in the dark room with her naked eyes; sure enough, she was able to make out a faint light coming from the mushrooms.

Even Haruki Takahashi, the mycologist who first described C. orientalis, couldn’t believe his ears when he heard that it was bioluminescent. It’s already a big enough discovery to have found C. orientalis growing in Fukuoka, but to have discovered that it bioluminesces is a discovery maybe a hundred times bigger!

I’d like to take this opportunity to explain a bit about the mushroom Cruentomycena orientalis. First, look at this tweet from Haruki Takahashi:

(Translation: Cruentomycena orientalis (Har. Takah. & Taneyama), a.k.a. the “garnet dead-leaf mushroom.” The word “cruentus” from the genus name means “blood-stained” or “blood-red” in Latin. This photo is of the holotype, taken Oct. 2011, Ishigaki Island.)

The holotype specimen shown above was collected on Ishigaki Island, Okinawa prefecture. Its cap and stipe were dry. (By the way, specimens found in Amami Ōshima had dry caps but viscid stipes.)

The mushroom’s “blood-stained” color really gets your attention, doesn’t it?

Currently, C. orientalis and allies have only been found in Kyūshū, parts of the Kantō region and Yamagata prefecture. And the specimens found in those regions have clear morphological differences: the viscidity of their cap surface.

Take a look at these specimens of C. orientalis from the Mt. Fuji foothills. I was immediately drawn to this photo when my Facebook friend Kaya Ide posted it to her timeline:

Maybe this photo was taken after rain, but it’s clear that the cap is viscid. This viscidity is a clear difference with Haruki Takahashi’s photos above, and different from Ami’s photos as well.

However, it’s still not known whether the Kyūshū specimens and Kantō region specimens are actually different species or not.

So, what characterizes Cruentomycena? I’ll quote Haruki Takahashi below:

Fruiting bodies are small and mycenoid to marasmielloid. Colors are crimson to blood-red. Pileus is usually centrally depressed, and can be viscid or dry when moist. Lamellae are distant, decurrent, and marginate. Stipe can be viscid or dry when moist. Pileipellis tissue is composed of repent, smooth, gelatinous or non-gelatinous hyphae. Pileal trama are pseudoamyloid and pseudoparenchytamous. Spores are amyloid, oblong to pip-shaped. Without pleurocystidia. Clamped. Grows on leaves.

In 2008, Petersen et al. performed phylogenetic analysis on ITS and nrLSU region sequences of a specimen of Cruentomycena, and showed that Cruentomycena is closer to Resinomycena and the panelloid clade (containing bioluminescent species such as the pored, pleurotoid Panellus pusillus) than it is to the Mycena genus.

At the time of that publication, Cruentomycena spp. were said to be a disjunct distribution from Australia and Russia, but recently, it’s become known that the mushrooms are widely distributed throughout eastern Asia (Thailand) and various parts of Japan (Ishigaki Island, Amami Ōshima, Honshū, and Kyūshū).

As you can see, there’s nothing in the description of Cruentomycena that describes it as bioluminescent. Now, perhaps you see the significance of the discovery that C. orientalis luminesces!

Finally, I received the following message from Mr. Takahashi:

Ami’s recent discovery has enormous taxonomic significance. I’ve been considering posting these findings to ResearchGate as an addendum to my work in The Fungal Flora in Southwestern Japan: Agarics and Boletes.

I believe that this discovery is likely to make large waves in the field of bioluminescent mushrooms. It’s the sort of find that might get everyone to start wondering what other mushrooms might be discovered to have bioluminescence, if you just take the time to observe them… 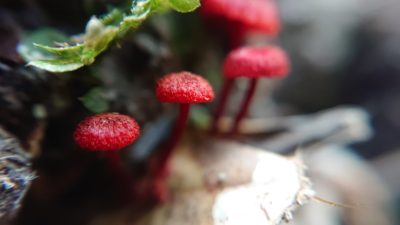 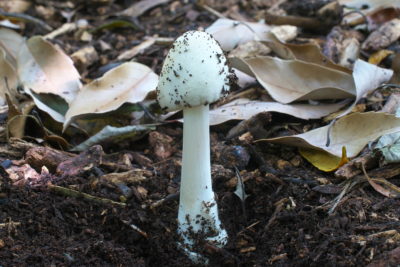