Translator’s note: this article discusses the mushroom Podostroma cornu-damae, known in Japanese as “kaentake,” or “flame mushroom.” P. cornu-damae is bright red and nearly unmistakable. It is primarily found in Japan, although it is known to exist in mainland Asia and Indonesia as well. Consuming even a small amount of the mushroom can lead to death.

Those of you with some knowledge of Podostroma cornu-damae (known in Japanese as “kaentake,” or “flame mushroom”) may realize that P. cornu-damae doesn’t actually grow like this. It typically pops out from tree roots. It isn’t every day that you see P. cornu-damae popping out from a cluster of moss as if to say hello.

As Japanese oak wilt spreads across western Japan, we’ve begun to see P. cornu-damae spread throughout the region as well.
Just the other day, a mushroom-loving friend of mine who lives in Ashiya city in Hyōgo Prefecture sent me a photo of the mushroom growing near his office. Until now, there haven’t been many reports of P. cornu-damae in the city of Kōbe, but I’ll bet it won’t be too long before we see it there as well.

We can also say that as incidents of Japanese oak wilt diminish, P. cornu-damae sightings are bound to decrease as well. That day will eventually come, and likely sooner rather than later.

I often find myself thinking,

“Why is P. cornu-damae treated like such a villain?”

There’s no shortage of things in this world that can lead to death if you eat them.
Among the mushrooms, there are such deadly species as Amanita virosa, Amanita volvata, Clitocybe acromelalga, Amanita subjunquillea, Hypholoma fasciculare, and many, many more.

And yet, out of all of the poisonous mushrooms, P. cornu-damae is treated particularly cruelly.

But I needn’t have wondered long; the reasoning behind this treatment became clear when I posted this article’s lead photo to the Japanese mushroom fan-focused “Kinoko-bu” Facebook group. The most common comments were:

Heh, well, “super-poisonous” is a fair assessment, I guess.

But I take issue with the statement “killer mushroom.”
Mushrooms never attack people, much less do they premeditate plans for murder.
They just peacefully sit there, diligently doing each day’s modest work in order to spread their spores and give life to their descendants.

At first, I wondered why the specific term “killer mushroom” kept coming up. Then, someone in the comments wrote “this is the same mushroom, right?” along with a link to the following article.
The title of that article is as follows:

“Reader Beware: The Killer Mushroom Podostroma cornu-damae! What Happens When You Touch It?”

(The website has recently taken down the article in question.)

Bit of an inflammatory title, wouldn’t you say?
From this clickbait title, it’s clear that the primary purpose of this article is to get more page views.

YAMA HACK is a website full of information for mountaineers and hikers, billing itself as “Japan’s Top Mountaineering Magazine.” I also enjoy mountaineering, and I’ve found that there are many great articles in the magazine about climbing goods, mountain routes, and more.

So what’s up with this article?

This article reeks of P. cornu-damae hate. They even give blatant misinformation. If the article had made some mistakes, that would be one thing, but they’re deliberately spreading lies. This is nothing but yellow journalism intended to stoke people’s fears.

Have a look at the article’s headings. I’ll then break them down, one by one.
1. The Deadly Mushroom Podostroma cornu-damae
2. The Top 5 Most Terrifying Symptoms
3. What to Do If You Find P. cornu-damae
4. P. cornu-damae: Crimson-Red Killer Plant

There have been reports of 10 people poisoned from consumption of P. cornu-damae. Of those cases, 2 people died.

So I have nothing but skepticism for the claim that touching this mushroom can cause your skin to peel off.

There’s another common belief that I hear often:

“If you break P. cornu-damae and touch the juices inside, won’t you break out in a rash?”

However, asking people who’ve tried this:

was the response I got. Of course, not everyone is the same. I’m sure there are people out there somewhere who break out in rashes whenever they hold any type of mushroom. But, generally speaking… my personal opinion is that you probably won’t experience any sort of skin irritation.

But you may want to avoid rubbing your eyes after touching P. cornu-damae.

2. The Top 5 Most Terrifying Symptoms

Moving on to the worst sin of this article: using the following photo to blatantly threaten readers that if you touch P. cornu-damae, your skin will peel off like this! The Reader Beware in this article’s title seems to be suggestively nodding towards this photo.

This photo does NOT depict skin irritation from P. cornu-damae!!

In other words, this article is using a falsely described, stolen photo (they credit the website where they got it, but that original website is using the photo without permission, so this secondary usage is also without permission) to emphasize the fearsome nature of Podostroma cornu-damae.

So where is this photo originally from? I believe this might be the original source. (This is what came up when I searched for the photo. Its true origin is uncertain.)

So this article makes use of this photo, but what is it a photo of?

This is actually a photo of athlete’s foot.

In other words, the article warns the readers to “beware” that this type of skin peeling could happen to them, while blatantly showing a photo of an athlete’s foot infection.

At this point, I can’t help but think the article was written with malicious intent.

Showing a photo of an athlete’s foot infection and saying “how about that!” with no intent other than to fan the flames of P. cornu-damae hysteria. This is the epitome of absurdity.

3. What to Do If You Find P. cornu-damae

The article writes that if you discover P. cornu-damae, you should “report it to your local health authority.”

Let’s leave an evaluation of this statement for later, and first look at this quote from the article:

“Trying to dispose of this mushroom yourself is very dangerous. If you pick this mushroom and bury it in the ground, it will generally start growing from where you placed it.”

P. cornu-damae is a fungus. Fungi grow from mycelium in the ground. Even if you pick the fruiting body, when conditions are right, more fruiting bodies will emerge from that mycelium. Reporting this to the local health authority and having someone come out and pick it for you won’t change this.

If you truly wish to eliminate the fungus, you need to dig up all of the mycelium in the ground and dispose of it, but it’s unlikely that you’ll be able to do that.

And is this sort of disposal even necessary at all???

This heading gives us a good barometer of the level of knowledge of the author (lol).

For starters, P. cornu-damae is not a “plant.”

To think that someone this ignorant wrote an article about P. cornu-damae, I really just feel sorry for P. cornu-damae itself. That poor mushroom. And when I think about how many people, their fears fanned by this sort of article, will think “P. cornu-damae is dangerous!” I feel that Japan’s future is dark indeed.

It goes without saying, but P. cornu-damae is a fungus.

What’s more, it is not a “killer mushroom.” Yes, people have eaten P. cornu-damae and died. But if we listen to the P. cornu-damae‘s thoughts…

“Everyone says not to eat me, and yet, you eat me anyway! What did you expect…?”

Maybe P. cornu-damae is getting tired of being eaten. (Lol.)

How should we coexist with P. cornu-damae?

Allow me to reiterate an important point.

P. cornu-damae is a fungus.

This fungus does not attack people. It does not set traps and devour people who fall into them. It doesn’t even cannibalize other P. cornu-damae (lol).

Fungi can have symbiotic relationships with plants, and these relationships allow plants to absorb more moisture and nutrients. Fungi can even protect plants from dehydration and disease.

If fungi are eliminated, what happens to the plants???

It’s easy to imagine many disadvantages to the scenario of fungi dying off.

Also, fungi serve the role of “decomposer” within the Earth’s lifecycle. Without decomposers, all sorts of objects on Earth would stick around without breaking down, turning the Earth into a ever-worsening garbage dump.

Do you see what I’m getting at? P. cornu-damae is part of this circle of life, too.

That Creepy Mushroom that Appears with Japanese Oak Wilt

But Japanese oak wilt is a normal, natural phenomenon, including the Raffaelea quercivora and Platypus quercivorus (oak ambrosia beetles) that cause it. And P. cornu-damae, which occurs as part of this phenomenon, is a meaningful part of this process.

Is it really okay for humans to endeavour to remove this organism, in the name of “extermination?”

Some might say, “what if children touch it and their skin gets irritated?”

However, there is a common plant that causes skin irritation if you touch it: poison oak. It often grows in parks (I often accidentally brush up against it and get rashes), and yet, I’ve never heard that I should “report it to the local health authority” whenever I find it.

Also, the Japanese tree frog releases poison from its skin, and this poison can cause irritation or even blindness if you rub your eyes after touching the frog.

But have you ever heard that we should exterminate Japanese tree frogs because of this?! Ever?

Hopefully my point is clear. If someone touches an organism and something happens to them, that person is at fault. We should be teaching our kids not to touch things that they don’t know about. If we teach them what each organism is, and what you can and can’t do with it, then there will be nothing to fear… and we won’t need to talk about “extermination” of certain species.

On the topic of extermination: recently, it was discovered that Asian tiger mosquitoes in Yoyogi Park caused an outbreak of Dengue fever. I felt really sorry for those mosquitoes, but in a way, I can’t blame the park for starting an extermination effort. After all, mosquitoes deliberately target people. Quietly… sneakily.

And there was also recent news about the non-native Redback spider discovered living in various places in Japan. It was a big deal, and treated as a major “incident” by news media.

So what sort of damage can this venomous spider cause? To quote the Osaka city website that I found discussing the topic,

Bites can cause a fair amount of pain. Generally, only the location of the bite will hurt, but there have been occasional cases where pain was experienced throughout the body, along with nausea. Just in case, if you are bitten, clean the bite with water, and get medical attention as soon as you can. Reports say that babies and the elderly develop especially strong symptoms, so particular care should be taken with people in these age groups.

Reports say that this spider is passive, and typically minds its own business. People will not be bitten by the spider unless they get very close to it. However, the spider is a non-native species, and it’s venomous, so everyone acts like we have no choice but to exterminate it.

Which brings us back to P. cornu-damae. Unlike Asian tiger mosquitoes and Redback spiders, P. cornu-damae does not attack people in any way. It cannot seriously hurt anyone unless that person comes by, picks the mushroom, and then eats it.

For this reason, I think we should simply leave this mushroom be.

P. cornu-damae emerges as part of a natural cycle, and then, quietly disappears. I’ve heard that two or three years after it first fruits, the organism will stop fruiting at all.

Until it reaches the natural end of its lifecycle, I ask that you protect its existence.

This article was translated by Nathaniel Guy. 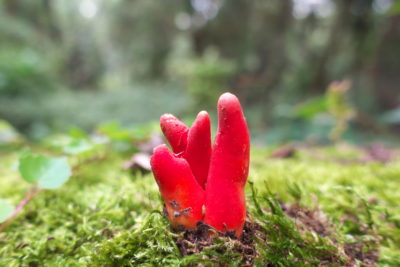